ASHRAE 62: A review of key requirements

Indoor air quality (IAQ) is probably the most commonly discussed aspect of building indoor environmental quality (IEQ). IAQ has direct effects on our health as well as the perception of an acceptable indoor environment. In the United States, ASHRAE Standard 62.1: Ventilation for Acceptable Indoor Air Quality is the most commonly referenced standard to quantify acceptable conditions and appropriate HVAC system design. ASHRAE Standard 62.1 either forms the basis for most mechanical codes or is directly referenced by the codes themselves.

The standard is best known for its regulation of the amount of ventilation air delivered to each space by HVAC systems through its ventilation rate procedure approach to system design. However, the standard covers many other aspects of building design that are less well known and understood. The key aspects of building design that it covers are: outdoor air quality, envelope design and construction, HVAC system construction, concept of air classes, the ventilation rate procedure, the IAQ procedure, the natural ventilation procedure, and operations and maintenance.

The VRP is the most commonly used method for determining outside air requirements.   The outside air is calculated based on the zone use, the maximum number of occupants, the square footage of the zone and the ventilation effectiveness.  The amount of outside air per person is provided in Table 6.1 in the ASHRAE Standard.  The amount of outside air required per square foot is also found in Table 6.1.  The ventilation effectiveness can be found in Table 6.2 and is based upon the supply and return duct locations as well as the temperature difference between the supply air and the space temperature.

The cooling and heating equipment would have to be sized to handle 495CFM of outside air.

To save energy using the VRP, ASRHAE 62.1 will allow the outside air to be reduced based on an occupancy sensing technique such as carbon dioxide (C02) Demand Control Ventilation (DCV).  This allows the outside air to be “reset” based on the C02 levels.  Most controls systems are set up to maintain a difference of 700PPM differential of C02 between inside and outside.  If the outside level of C02 is 300PPM, and considering a 700 PPM differential, the C02 DCV setpoint would be 1,000 PPM.  If only a few people were in the space, the outside air would be reduced to maintain the 1,000PPM setpoint and much energy would be saved, assuming the HVAC equipment was designed to work efficiently at part load.  In some situations, DCV with the VRP can lead to higher humidity conditions because standard packaged rooftop units cannot off-load sufficiently and that leads to large temperature and humidity swings as a large compressor is energizing to cool/dehumidify a much smaller load.  The designer must take precaution as to how the selected equipment will operate during part-load conditions.

The IAQP is used less frequently than the VRP.  Why you may ask?  The primary reason is that the IAQP usually requires more time.  In addition, engineers are most often trained only on the VRP.  The IAQP has the potential to save the most equipment cost on new and retrofit projects plus provide much higher energy savings due to the ability to reduce outside air by adding air purification and cleaning the air in the building, thus allowing the air to be recirculated and thereby reducing the need for higher outside air quantities.  Unlike the VRP, the IAQP does not look at the amount of outside air per person or per square foot, instead it requires reviewing the contaminants of concern and running mass balance equations to determine the steady state conditions of contaminants based on a filtration effectiveness for the chemicals modeled.

In an effort to reduce the consulting engineers time, Enhale developed an IAQ software based on ASHRAE 62.1  The spreadsheet calculates both the VRP outside air requirements and the IAQP requirements simultaneously.  All of the mass balance equations and the effectiveness of Enhale’ products are already included in the spreadsheet for each chemical modeled.  In a matter of a few minutes, one can see how low you can go with the outside air using the IAQP.  Generally, the pressurization requirements of the building is the limiting factor as to how low you can go with the outside air.  This method applies to all commercial, non-healthcare, applications.  Thousands of projects have been designed using Enhale’ IAQ software spreadsheet.

In addition to the reduced outside air, DCV can be used with the IAQP.  This combination will provide for the most energy efficient building possible while providing exceptional IAQ.  Since the cooling/dehumidification equipment is downsized during design, part load conditions do not cause the same “hunting/cycling” that occurs when using the VRP.

Considering how polluted outside air can be, it makes complete sense ($cents$) to reduce outside air, recirculate the indoor air that’s already conditioned and simply purify the indoor air. 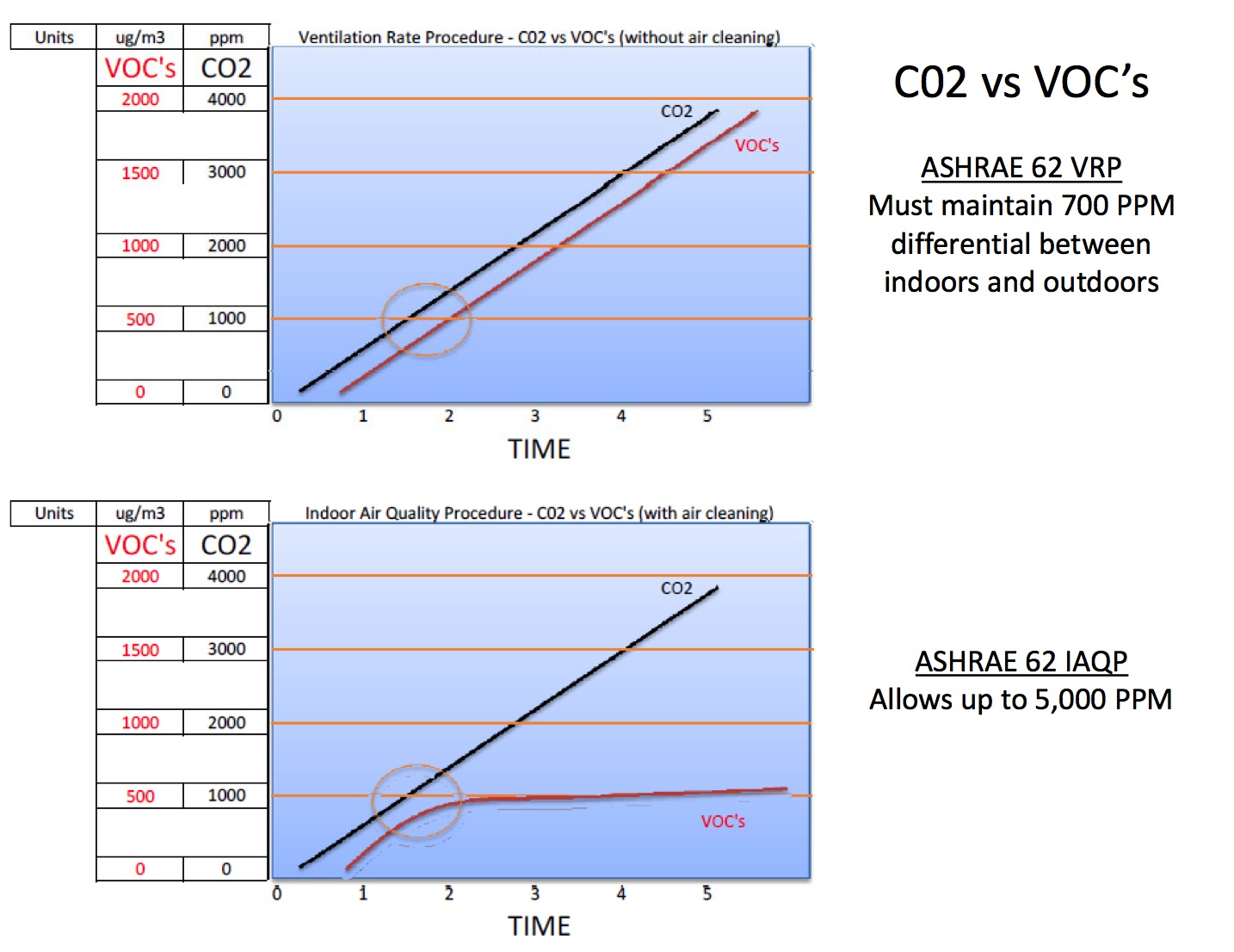 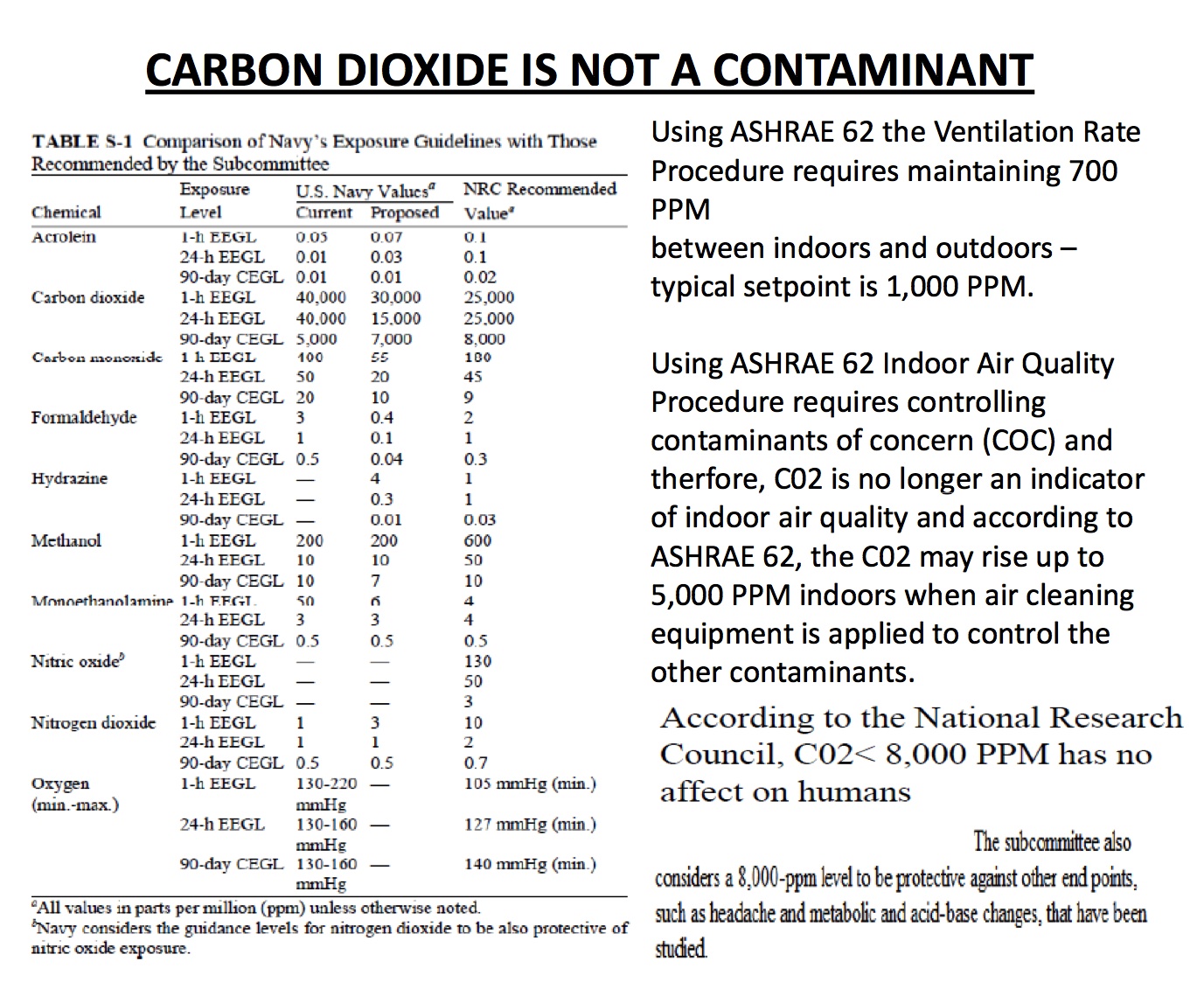